WHO IS THE TOUGH ONE?

My roomate (the professional volleybal player from a few posts below.) is really into UFC( Ultimate fighting) and once in a while I end up watching a fight or two with him. It's a pretty violent sport but sometimes the UFC tournaments have some very exciting fights. However, sometimes they go too far with their violence to the point of becoming ridiculous. The short story below is based on a fact.

It was a big UFC fight. The fighter in black shorts was a very strong one and he was kicking the other guy's butt pretty hard. 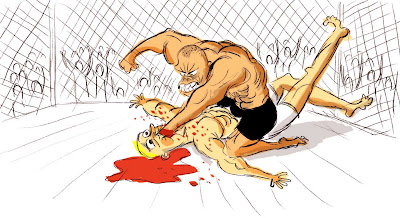 After disfigurating the other guy's face, the cocky fighter in the black shorts won. 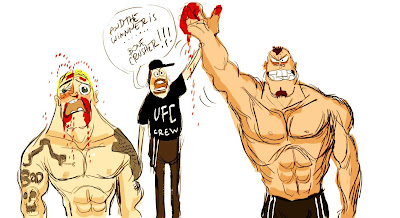 He was all pumped up and he thought he was invincible at that point. He left the UFC club full of manly vitality. Suddenly, he encountered two pitbulls barking at him. 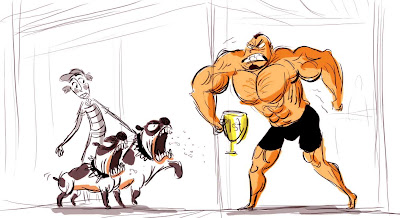 He decided to attack! So he jumped at the pitbulls and started punching their face. 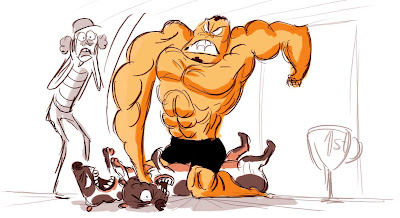 Too bad he was not Conan the barbarian and the animals were not peaceful camels. The dogs decided to counterattack and it was not a pretty sight. One of the pitbulls almost devoured his whole arm and the other one had a good bite on his genital area. it was "almost" total damage. 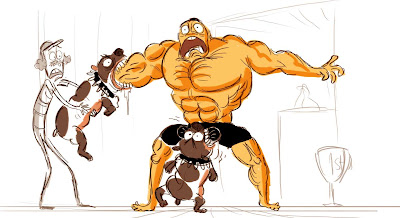 Like I said before, this story was not invented. It was based on a fact. It really amazes me the fact that people can become so wild to the point of wanting to punch pitbulls in the head to show how tough they are. Those are vicious creatures and they are no joke. However, man sometimes forget they are rational human beings and start acting like caveman in order to show off how manly they are. Luckily enough he didn't encounter Lions. He would loose his head instead of his genital.

DSM said…
Oh, BOY! A LEO-gram!
The only p-terriers I know are sweet; the owner of the dog is a great contrast to the 'hulk' and doesn't look like the type to raise fighting bulls.

Unknown said…
I'd much rather lose my head than my genitals. Great story, Leo!
10:06 AM

Megan Nicole Dong said…
Hahaha--Bravo! I love your storytelling. These drawings are hilarious and so well done.
7:36 PM

Leo Matsuda said…
tek! : thanks so much, man! I really love your drawings and coming from you it means a lot.

Ian : I'm glad you like those ufc guys. lol I agree that it was a challenging combination since I'm not a ufc guy myself.

DSM : I totally agree with you about the Hulk and the skinny guy raising those pitbulls. it's definitely a contrast. Thanks so much for your kind words!!!

Munchanka: haha!!! I'm with you Austin. Loosing my genitals would mean "death" for sure.

Felix said…
Nice! HAHAHAHA remind me of my highschool friend.
6:15 AM 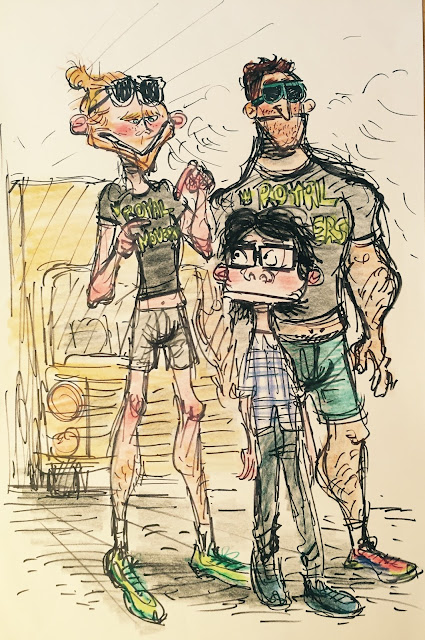 Moving out from Laurel Canyon Apartment.