I saw this scene at the Airport a few weeks ago. A family played cards while waiting for their boarding time. What stroke me in this particular situation is the distance between the parents and their son. The mother seemed to be very loving towards her husband and while the boy and his daddy played cards she kept herself physically away from her child. I felt as if I was watching a scene from "Ordinary people" or even "East of Eden". The mother kept whispering at the husband ears while both of them giggled at the child's moves in the game. 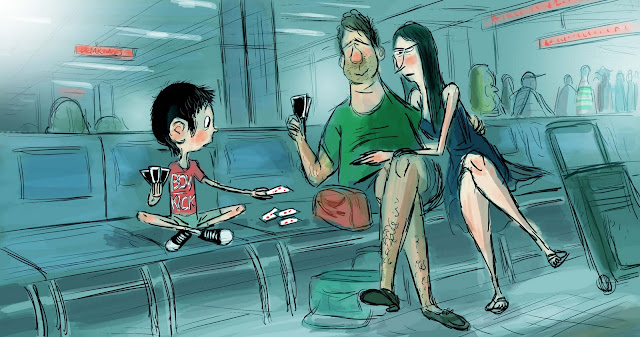 Later on the boy came to hug his mother begging for love but she could barely look at her child's eyes. 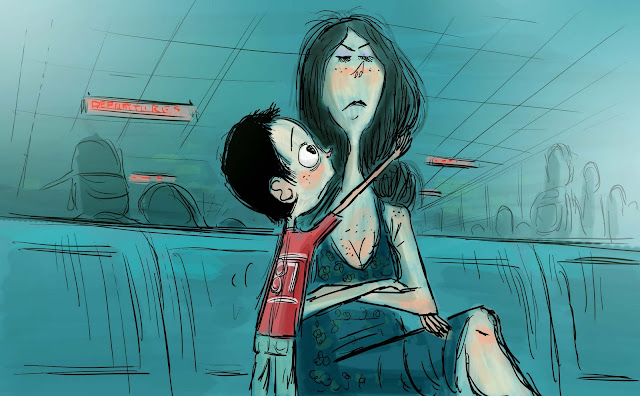 Sofia said…
I love this! I do the same observations all the time, sorry mi english.
6:23 PM

Alex_Munguia said…
wtf, haha thats messed up. Some mothers... that second drawing is so emotive. haha Good Stuff. thanks for posting it.
6:44 PM

Katie said…
Sad...beautiful drawings, though! I love when you draw your everyday life observations.
8:57 PM

Jesse Soto said…
That could be torture for the poor kid :( You tend to observe more of these moments the more you draw. You could make a small book of just little sketches. Good stuff!
2:28 AM

Leo Matsuda said…
Sofia: Thanks for visiting my blog. Observing people is definitely a fun exercise. :-)

Alex_Munguia: I'm glad to hear the second drawing evokes some emotion to you. Thank you so much for visiting!!

Carrie Liao: Thank you so much for your kind words!!

Chris Palmer: Thanks man. I hope all is well
with you!!

Katie: Thank you for the kind words, Katie! I'm so glad to hear that you enjoy my everyday life observations. I love your sketches!

tek!: I'm glad you enjoyed it! Awesome posts in your blog too. keep on rocking!!

Jesse: I totally agree w you. I would love to take on the book idea. :-)

Nic XL Gregory art: Thanks man! I love coming up with ideas based on small day-to-day life situations. They ring something true for me. :-)
10:47 AM

Jeremy Bernstein said…
This comment has been removed by the author.
2:31 AM

Jeremy Bernstein said…
Ha. Such an awesome scene.. even if it is a bit sad. Love the color choices too.
2:32 AM

Heidi Smith said…
I love the design for that little boy.
4:01 AM

Adele said…
Did you know there’s a 12 word sentence you can say to your man... that will trigger intense feelings of love and instinctual attraction for you deep within his chest?

Because hidden in these 12 words is a “secret signal” that fuels a man’s instinct to love, please and protect you with all his heart...

This instinct is so hardwired into a man’s genetics that it will drive him to work harder than ever before to make your relationship the best part of both of your lives.

In fact, triggering this powerful instinct is so important to having the best possible relationship with your man that once you send your man one of these “Secret Signals”...

...You’ll immediately notice him open his mind and heart to you in a way he’s never experienced before and he’ll see you as the only woman in the world who has ever truly understood him.

And the powerful “secret signal” found in those 12 words is just one of many that veteran dating coach and relationship expert, James Bauer, has discovered throughout his career.

Thousands of women are already using these “secret signals” to transform their failing relationships into the passionate romances they’ve always dreamed of.

And countless other women are using them to hook great guys from the very first time they meet.

...And what keeps his love and attention transfixed on you and only you.

This presentation reveals these relationship secrets and much, much more... and it’s a real game changer for any woman who knows she deserves better.

If now is a good time, you’ll want to watch this life changing presentation while it’s still up.