I really enjoyed this film directed by Takashi Koizumi and written by Akira Kurosawa. It portraits lhei Misawa (Akira Terao), a samurai without a master - ronin. lhei is a masterless samurai who is amazingly skilled and wise but on the other hand he is very generous and warm too. These traits make him different from other samurais that are usually cold blooded and mercyless. lhei Misawa is always smiling and being polite even when he is in a serious combat and this puts him in conflict with other samurais that can't really understand him. 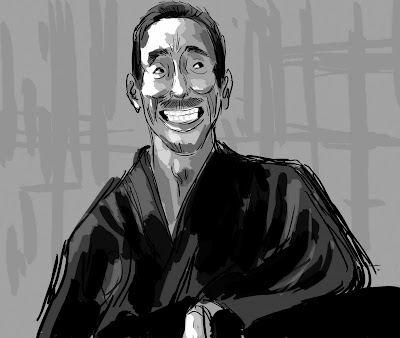 lhei in combat with another samurai. 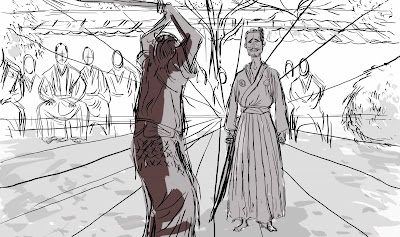 Even in the bloodiest combat lhei had in the film this was his angriest expression. 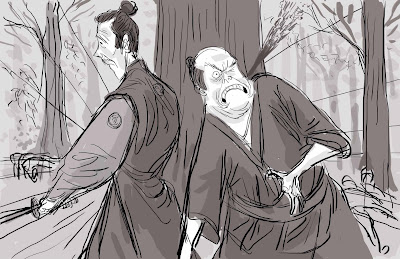 Andreas Schuster said…
the last samurai movie i really liked was "twilight samurai".
also because it had an unusual view and main protagonist.
thx for this post, i´ll try to find the dvd later today.
1:05 AM

;) said…
I really appreciate your work... specially on samuraï...and I agree for the choice of Ame agaru too... With the cinema of Kurosawa (of course !) my favorite japanese movie could be Harakiri by Kobayashi...
4:19 AM

David Nam said…
This comment has been removed by the author.
9:16 PM

David Nam said…
Hey Leo!
Long time no see dude. How've you been? As always, your work is pretty damn cool. Made me want to see the movie. If you haven't already, you should check out "Redbeard" by kurosawa - a bit dragging but good film nonetheless
10:22 PM

Janine Chang said…
Wow I found your blog! I always see your film in the character animation hallway in Calarts! I really loved your film with the kiss thing :) You're a great animator!
10:53 AM

louis THOMAS said…
so great!!like always on this blog..i like the way you catch the "camera's eye" in your storyboards and sketches..
love your style and your movies references generally!!
3:14 PM

Josh Dotson said…
Cool shots studies dude.. looks like your mastering the Cintiq! I'm gonna throw some of my Cintiq boards up soon.
1:27 AM

kalonji said…
i've seen this movie so many times,its really poetic and also a good philosophy,far beyond the classic chambara samurai movies!
your artworks on that is awsome !

Unknown said…
that facial expression on the last drawing is awesome! so pushed!
11:40 AM