Everyone knows I'm a foreigner. Foreigners need either an ID or their Passport in order to get into bars or order alcoholic drinks. Since I still don't have a driver's licence I have to carry my passport whenever I go out for some drinks. I know it's not the best thing to do but I'm always very careful. 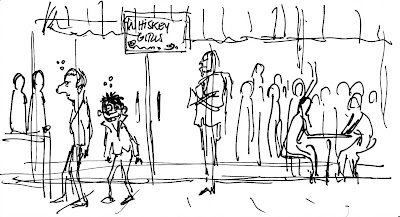 Me and my swiss friend Jonathan decided to go bar hopping in SD. We went to the whiskey girls bar in SD downtown. I had a blast. I got a lot to drink since I wasn't driving. Jonathan was bummed because he hated the bar and he couldn't drink too much. He was the designated driver. 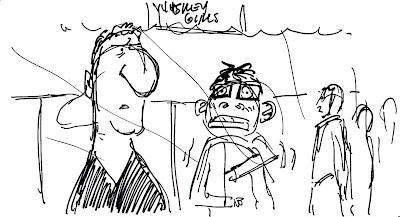 Suddenly, I realized I had lost my passport. I started to freak out and horrible thoughts started to pop in my head. Without my passport I'm no one in the US. I would be probably deported right away. 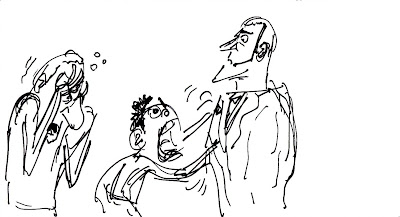 I grabbed the security guard and started to beg him to let me in so I could look for my passport. However, my drama wasn't being too effective. He told me that his boss wasn't allowing anyone to get in. I was so desperate that I almost started to cry. The Bouncer started to get emotionally involved with my case. 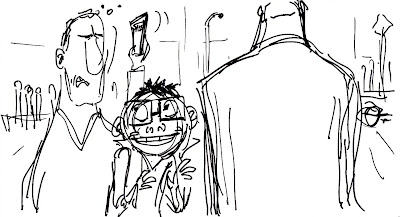 Suddenly, I felt something being pulled from my pocket. It was my passport! Jonathan found it on my rear pocket. It was very embarrassing but I felt so relieved that it wasn't lost in the bar. John hit my head with the passport and gave it back to me. He started to groan and walk back to the car. The Security guard didn't say anything. He just scrolled his eyes and left. Thanks for finding my passport Jonathan. Thanks for driving too!

Anonymous said…
Hahahaha! Buy that man a beer...but not at whisky girls.
2:00 PM

Heidi Smith said…
I like the guy with the huge nose!
9:09 PM

stephen said…
that's awsome dude. I lost both my keys and my cintiq pen the other day for about 4 hours, only to find them both in my back pockets.
10:55 AM

Numair said…
hahah good story. keep drawing those drawings, i could just imagine everything as it happened, the emotion, the expressions and everything. I know the feeling, it couldve been worse... You could have been so drunk you might not have realized you had it if it was already in your hand! Yep, that kind of story has happened to me. T-T *sniff = even more embarrassing.
5:35 AM

Numair said…
btw your drawings are still amongst the most amazing and expressive ive ever seen
5:37 AM

Mad Max Winston said…
ha, i can totally see that happening... I'm loving all your posts Leo, I miss you!
7:55 PM