These are the pieces I contributed for the Super Big Micro Gallery Show that recently happened at the Gallery Nucleus. The theme I decided to tackle was Sherlock Holmes.

Sherlock Holmes stories always impressed me since I was little. It's amazing to see a character with so many skills, such a vast understanding about science, martial arts and an amazing deducing ability. It's very engaging to follow a character with all these traits in any type of adventures.  In my opinion,  what is more compelling about Sherlock is it's character. When compared with Watson they all complement each other in such a distinct way. Watson is warmer, more sensationalistic and emotional whereas Sherlock is cold, extremely logical and subtle. Yet,  Sherlock likes his old pal more than anything and even though they are so different he could not live without his loyal friend Watson.

The Chuck Jones short film " Deduce, you say" also inspired me. I love Chuck Jones interpretation of Sherlock Holmes. The villain Dorlock Holmes ( Daffy Duck) had to face was the Shropshire Slasher, a huge and insanely strong outlaw. I though that I would give it a crack and come up with another badass villain. The one that always scared me and at the same time amazed my was Jack The Ripper.  His knowledge of the human body could be seen in the way he killed his victims. Even though he always left hints he was never caught and that made him one of the most dangerous serial killers of all times. 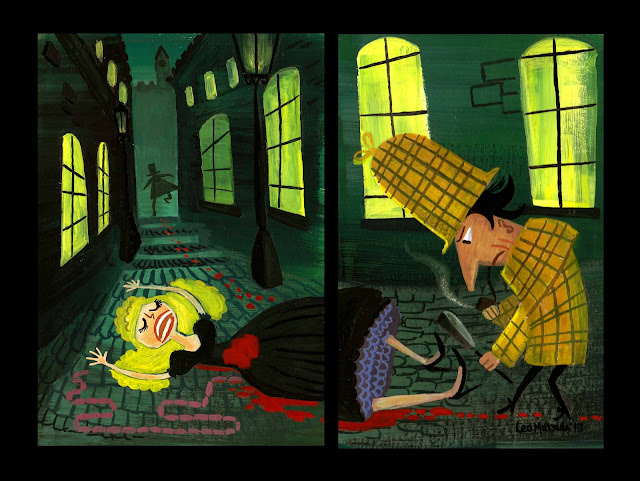 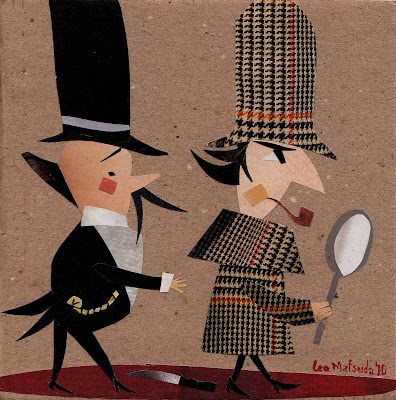 Avner Geller said…
These are fantastic! Detectives are by far the best subject matter to draw (maybe after old people :)
Love the ink and water color studies!
1:20 PM

Megan Nicole Dong said…
These were some of my faves from the gallery. I especially love the Jack the Ripper one. Great work!
3:59 PM

Lee said…
Fantastic, I love Sherlock Holmes and I love these.

I really like the little study at the bottom right
2:13 AM

Cheyenne said…
These are all so great! Your Sherlock designs are amazing..i would love to see these Sherlock's in a children's book!
6:01 AM

Nate Villanueva said…
thanks for showing these! love the studies too!
7:06 PM

Christian Robinson said…
Dude! your work is sooo wonderful.
I love these studies especially the watercolor and collage work.
2:32 PM

Megan said…
Hahaha, the sausage-link intestines in Jack the Ripper are so funny!
11:02 AM