I went to the Arc Light the other day to watch a movie and I saw this two kids looking at a display of the film NIGHTMARE ON ELM STREET. I was amazed to see how intense their looks were. The kids weren't questioning if that monster existed. They were questioning how they would do to run away from that beast while sleeping. They totally believed that Freddy could actually exist!!! I saw those two kids and I just realized how bleak my life has been after I've grown old. I'm skeptical to everything. I wish I were still were able to be as genuine as those kids. My life would be way more vivid and intense. 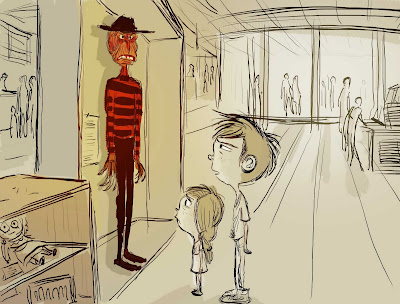 Darrell said…
When I was a little kid Freddy would show up in my dreams all the time. I would always kill him by developing some fantastic super power.
11:18 PM

Mark Andrew Smith said…
Haha, I love this post. As a kid I never saw the movies but my friends always told me about them so they were so scary and I stayed up at night imagining him. When I saw the films they were just funny later on and I got it.
12:21 AM

DSM said…
Curiosity is what you have to hang on to....
I bet you're not the old grump you think you are. I like your posts sooo much.

When THE WIZARD OF OZ would come on TV ONCE a year, I was afraid of Bert Lahr's Cowardly Lion. And I STILL can't sit through THE BIRDS. Mommeeeeee!
4:30 AM

Claire said…
Love this! You're so right about little kids. I remember a babysitter once let me watch Candyman and for months I couldn't look at the mirror in my bedroom. I wish I could say I've out grown this but I doubt I'll be seeing the new Nightmare on Elm Street.
7:15 AM

I remember watching the exorcism of Emily Rose and being terrified at 3 o clock am for MONTHS!

Freddy always was creepy, but man critters, gremlins, Labyrinth gobelins.... its the little guys you cant see that always scared me most!
10:36 AM

When you guys draw digitally; may I ask what your favorite drawing system is? I really enjoy revisiting your portfolio on line. I grew up doing what dad taught (watercolor) and yours have that bleeding wash look to them so I'd like to get some software to play with. Thanks! David, Key West
2:34 PM

Brandon said…
I miss those days. My friend was mad at me because my kids told his kids that unicorns were real. I couldn't help but laugh. I want them to hold onto that as long as they can. I used to think an alien was come down and give me special powers. Don't know when I gave that up:)
6:46 PM

Leo Matsuda said…
Thanks everyone for the kind words!

DSM: Hi David, I mostly work digitally but I still thumbail on paper. All the brushes are created in photoshop so i can play with different textures such as waterbased techiniques. Thanks s much for visiting my blog! great stuff in your blog as well.
-Leo
2:35 PM

DSM said…
Thanks, Leo... gotta save my pennies for Photoshop. It does give your work a good look.

Hey, I saw one of those puffer-fish signs hanging over a corner sushi shop. On the FOOD channel.... thought of your post. If you ever come to Key West, it's my treat at Origami.
2:04 PM

Jonathan Vermersch said…
I'm so in love with your line and character expressions... incredible works.
6:15 PM

Lindsey Lydecker said…
Ok, so my behavior as a child was totally normal... When I was little my mother would take me to her work and let me watch tv in the conference room. To go to the bathroom down the hall however, I had to pass by her boss' office. In that room, sitting on a shelf facing out the door looking into the hall was a very large Freddy Kruger doll. I would just stand in the door way staring at it when no one else was around. I would stare until my mind played tricks on me and I thought I saw it move. I'd then go running back to the conference room, scared out of my mind. Why in the hell did I do that...? Kids are so weird hahaha.

Régis said…
Legal! Awesome pieces man! I just noticed you had a couple of updates since the oldfish story one. You should announce these updates somewhere like Facebook or something... On the note about growing up, that's how I feel when watching a Miyazaki film.
12:44 AM

lucas accardo said…
Look at the bright side, for not being remotely puzzled about the display you blissfully spared yourself one atrocious movie.
11:11 AM