A few weeks ago my good and talented friend Zar was leaving to the bay area for work. It was a sad day and I felt as I was missing a good friend. I was invited for her farewell party and I would like to share with everyone this amazing adventure!! 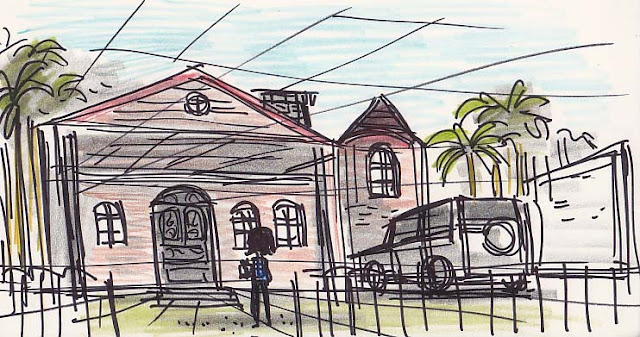 My friend Zar is Armenian. I know little about the Armenian culture but as soon as I arrived at her house I could notice the amazing architecture. I was amazed by how sturdy and well built the house was. 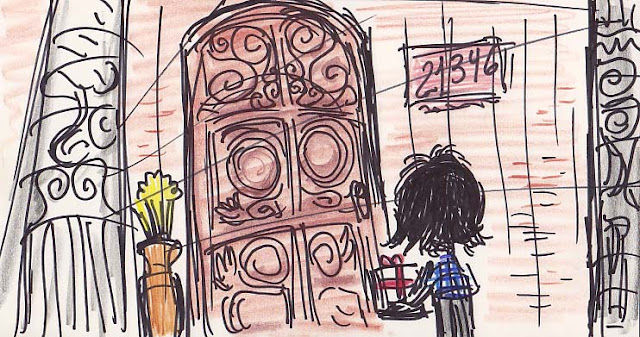 I was also dumbstruck by the ornaments in the door and the heavy pillars of the house. Really impressive!! 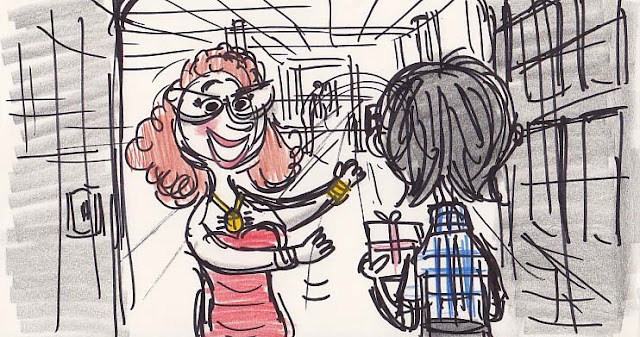 I knocked in the door. Zar opened it.  She kindly invited me in. 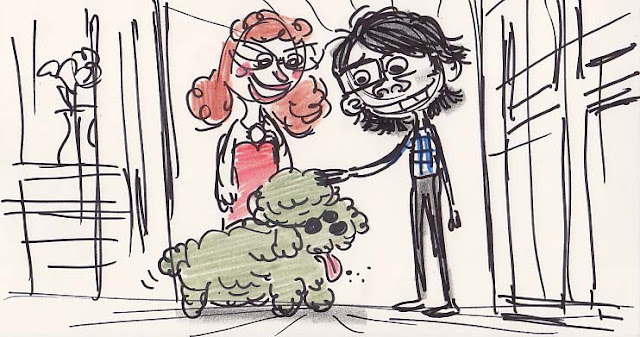 Right away, her friendly dog came to say hello. I was surprised by how friendly it was. 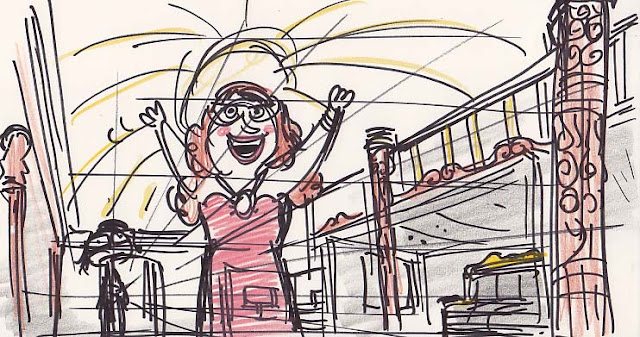 In aw, I walked through the sturdy and intricate living room of her house.  I complimented Zar: " What a nice house!" Then she said: " My father built it with his own hands!" I was amazed but at the same time shocked. I thought to myself: " Her father must be those very conservative and strong mediterranean men. When he sees me he might shop my head with his hammer in small little pieces. 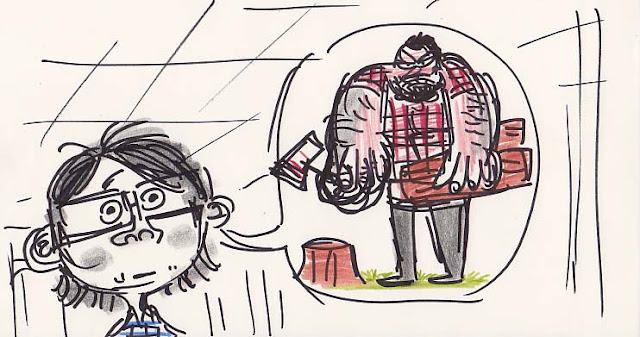 Then she introduced me to his father. For my surprise, he was a very gentle man. Great smile and loved to BBQ. Right away he prepared me a few skewers. 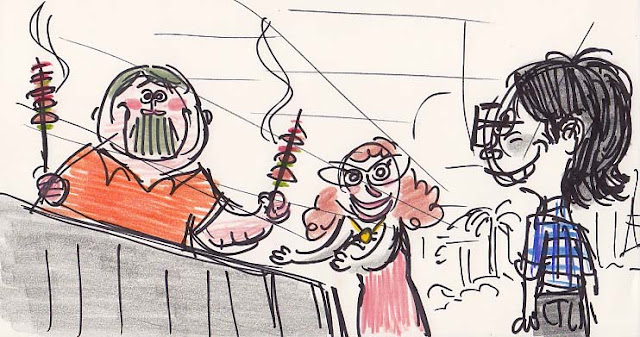 It was time to socialize. I mingled a bit with some of Zar's friends, Ci-Raggio and his girlfriend, Sadie. We were all trying to behave like decent Hollywood business people and would hold a very standoffish conversation. 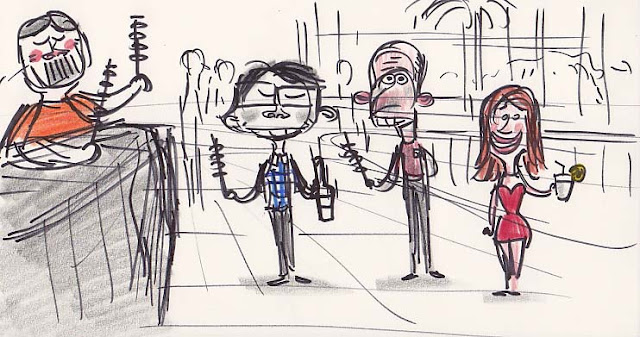 Ci-Raggio, behaving as a conservative man of principles, tells his girlfriend Sadie: "Drink as much Margaritas as you want today, dear. Today I'm the designator driver!" 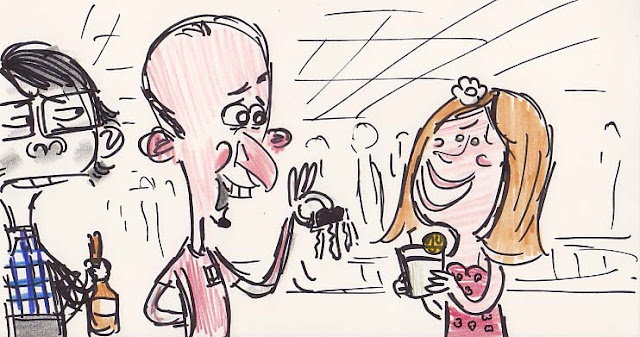 Sadie was extremely happy hearing that. She will get to drink as much Margaritas as she wants and be carried in the arms of her loved man. I thought to myself. "I wish I was a gentleman like Si-Raggio. Instead, I'm already drinking this beer". I guess I'm not a man of principles but I'll pretend I am anyway. This is Hollywood!". 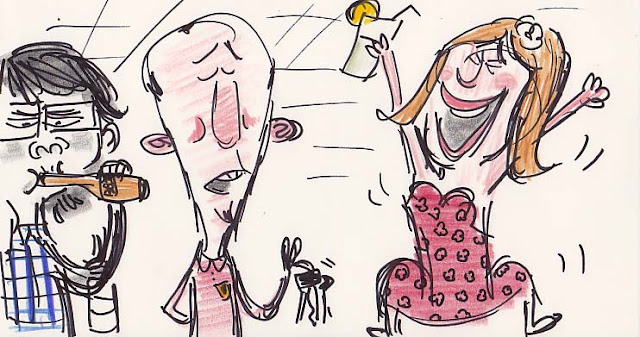 Time for dinner! Armenian food was served. I don't know too much about Mediterranean food but it smelled really good!! I was looking forward to eat some shish kabobs and some good Hummus. 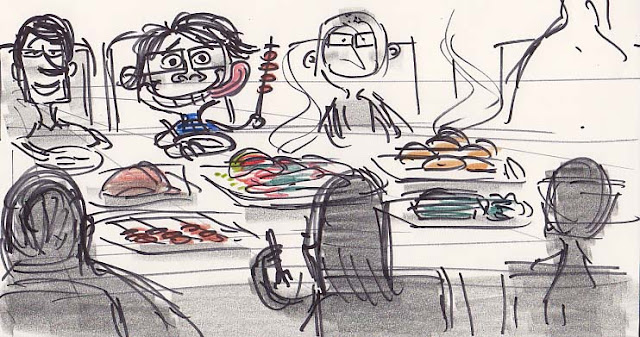 I was about to start enjoying myself with some delicious Armenian food when .... 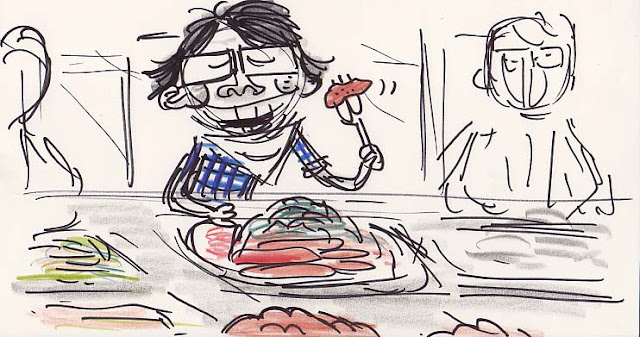 Zar's father joined us and  presented a giant bottle of Tequila. 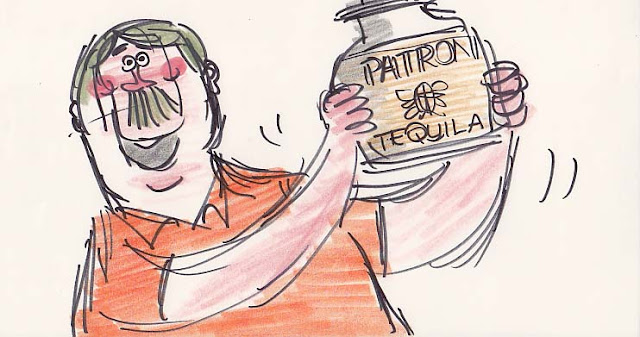 He then explained us how important friendship is in Armenian culture. He told us to drink it in name of our new friendship.   It looked like a very strong tequila and usually I can't handle too much alcohol but I couldn't disappointing Zar's father. 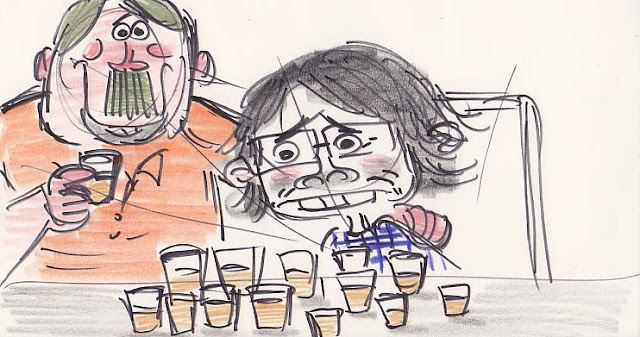 At that moment we all made a toast to our friendship. Everyone seemed so happy and excited.We sang together Armenian melodies. 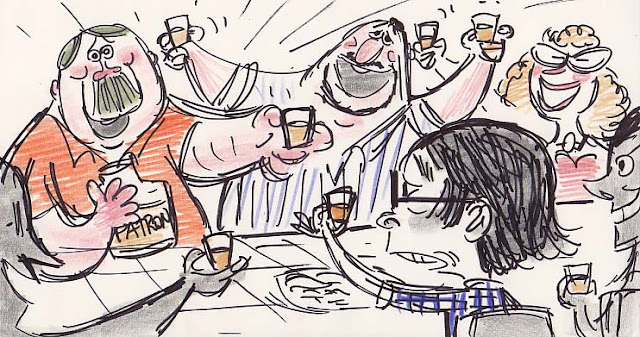 We all lifted our cups celebrating that beautiful moment between friends. My "hollywood" facade  was still holding  me back but my soul told me to drink it. 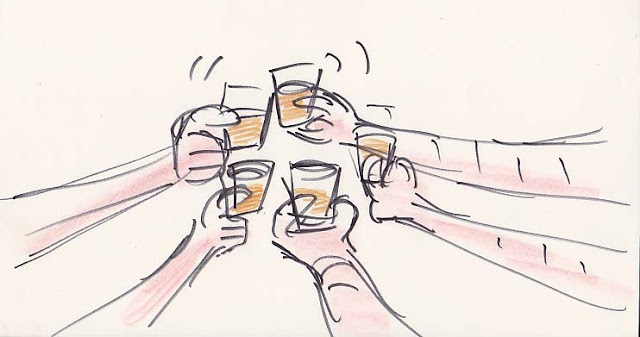 I went ahead and took the shot! It was as if burning flames were coming out from my nostrils and my eyes. Suddenly I felt something changing inside of me.... 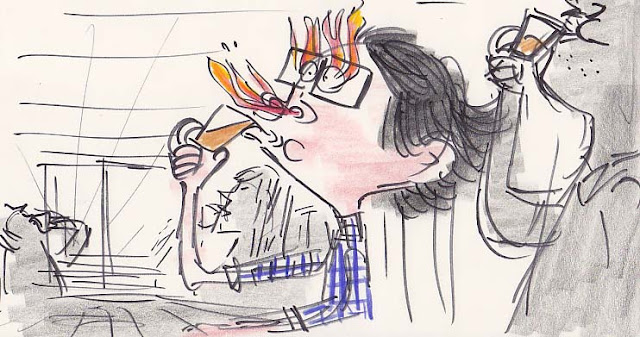 I believe after this first shot I had 5 other ones. When I got to my sixth I was completely wasted!! As you can see, my face looks like a tomato. People say that Asians lack a type of enzyme. And the are absolutely right!! From shyness and fake facade I become a crazy dude dancing non-stop and shaking my intoxicated body . Everyone in the party surrounded me and started to clap this moment of joy. 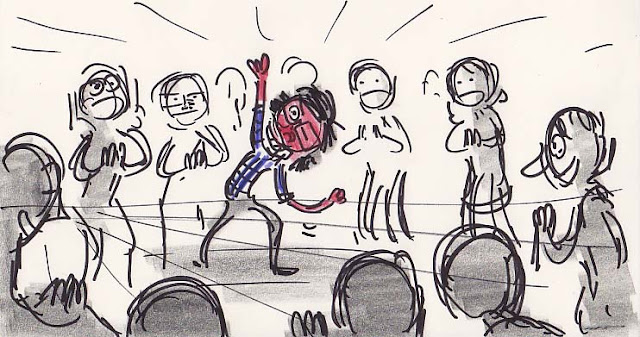 Ci- Raggio, the  designated driver ended up broking his word  and getting just a bit tipsy. He was grooving like a sexy belly dancer. 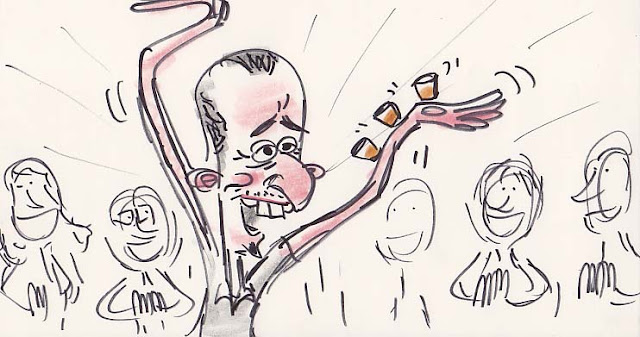 Suddenly, I got a call from my girlfriend at that time. She couldn't come earlier to the party because she had a wedding to attend. However, she were able to come at the ending of Zar's party. 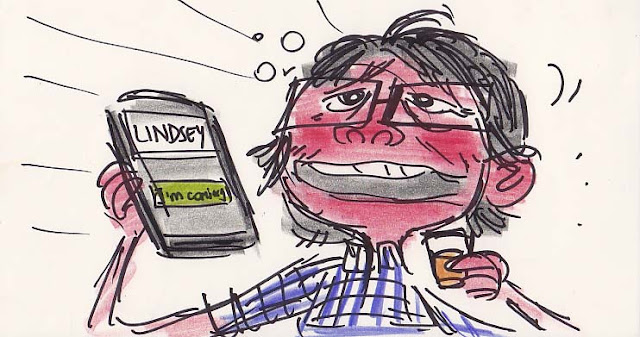 She came by expecting me to compliment her new dress but I was too drunk to notice. It was a beautiful dress but how could I notice anything after after 6 tequila shots ? 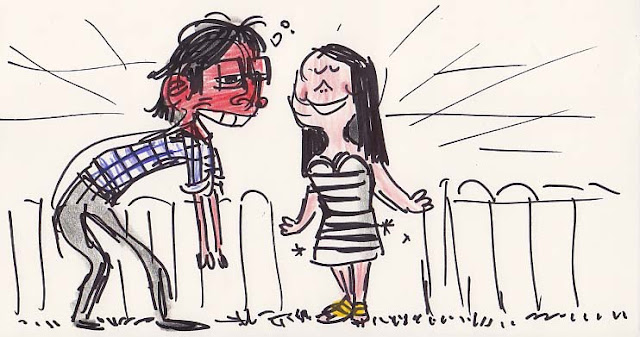 The only word I could remember was "tequila". I went back to join my Armenian friends in the grooving. 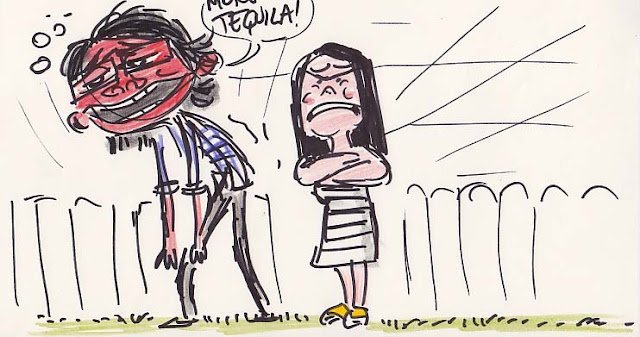 That was a crazy but fun night. Me and Ci-Raggio got really drunk but we finally were able to understand what Zar's father was trying to say. When we arrived at the party we were both playing standoffish and trying to maintain  appearances but after some tequila shots we both became sincere good friends. Thank you for Zar's father for sharing with us this friendly tradition. 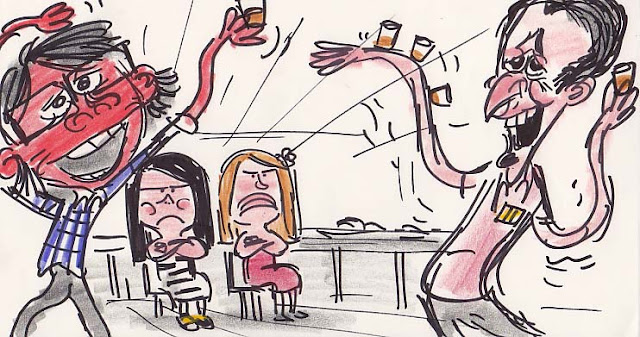 Too bad the ladies didn't enjoyed it as much as we did. No dress compliments for Lindsey, and no more margaritas for Sadie who at that point had no choice but to be the designator driver.  Well, I hope we can all maintain the Armenian tradition in our lives when we sober up. :)

Nate Villanueva said…
Classic Boys! i wanna party with you!!!
12:15 AM

Ravenhorus said…
Wow!! i discovered your blog a few hour ago, and i loved it! its amazing and so fun, i read all you published, i'm studying animation and now i will draw and draw, your blog is inspiration for me, i will be reading it whenever i can and comment on it, congratulations!
1:13 AM

Lee said…
Haha thats great! I feel like I was there

Tooninator said…
oh man. I've been there before. Well, not to Zar's, but ya know, gettin' ripped and ruinin' my gf's night. This is a worthy apology. Great work!
9:11 AM

Zar Galstyan said…
Ahahaha ahahah ahahaha!!! You're officially Armenian Leo... I mean Levon! This is so great, it was like re-living that night! You're the best Leo!!!

Edgar Karapetyan said…
That was the highlight of the night! Fun times.
11:10 AM

"C" said…
Leo, I was so destroyed I couldn't see 5 feet in front of me I thought you were some hot chick I was dancing with all night!
Awesome version of that night dude, Laughed so hard, we sure sent Zar off in proper celebration.
C
11:27 AM

Anonymous said…
HAHA! You tell a great story and even better-you ALWAYS do it with funny drawings too. So GOOD!
8:14 AM

Roxy said…
Leov Jan! This made our day. We sat around and read this and couldn't stop laughing. We loved having all of you over and are glad you guys got to be a part of one of our great traditions. Don't forget... Arms up, side to side.

P.S. You danced Armenian like no other Asian has danced before. We're very proud of you guys!

P.S.S. Dad say's this is lesson number one!

sewa mobil said…
Very nice, thanks for sharing.
9:35 AM

Mitchell Vizensky said…
I love when you tell us stories Leo! Thanks for this.
6:56 AM

pakoto said…
ahahahahaha amazing story! i love the expressions
4:32 AM