Yes, I know... Even 16-year-old kids can drive. Why an old dude like me cannot drive yet? Because I spent my whole life drawing cartoons and forgot there are other things in life a decent man needs to know about...but, hey!! I'm in the process of getting a driver's license now. Finally I'm realizing it's time to become a decent man and not having to ride my bicycle to Trader Joes to buy groceries.
So last week I had my behind-the-wheel test. My good friend Regis was the one in charge of taking me to the DMV since I'm still not allowed to drive on my own. Regis is a really kind soul and an optimistic man.  He kept pumping me up so I wouldn't feel nervous while driving.
There we were getting ready to go to the DMV to take the test that would happen in 40 minutes. 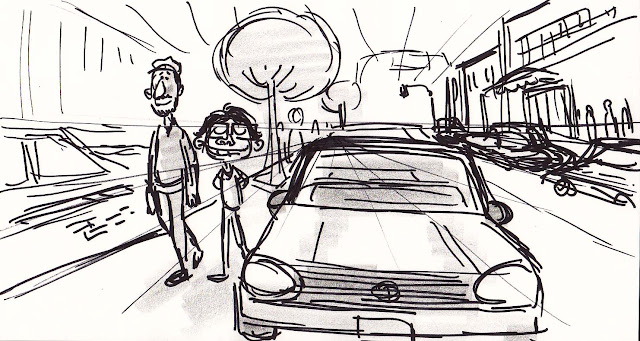 Because of his magnificent words of encouragement I was feeling really confident about driving. He gave me a few directions in how to drive safe and told me to start driving whenever I felt ready. 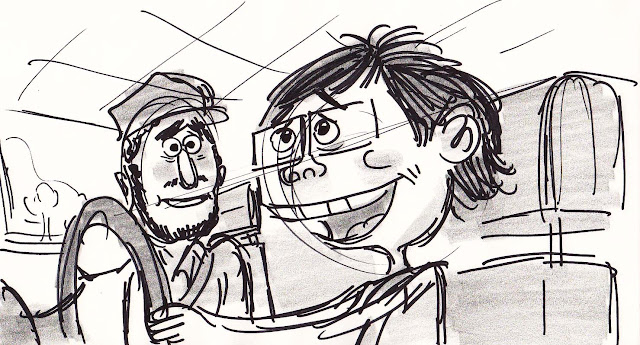 I felt readier than ever!! So I confidently turned on the keys, signed to the right and started reversing the car. 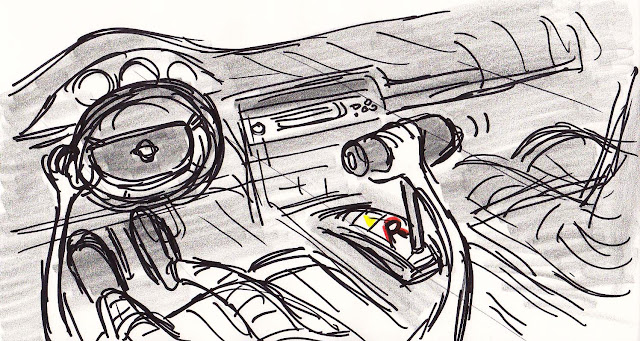 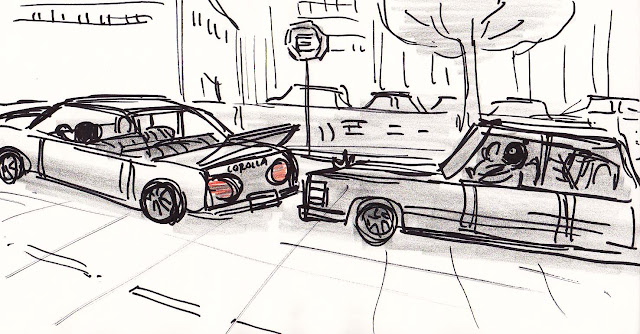 I bumped into a pink Cadillac behind me!! 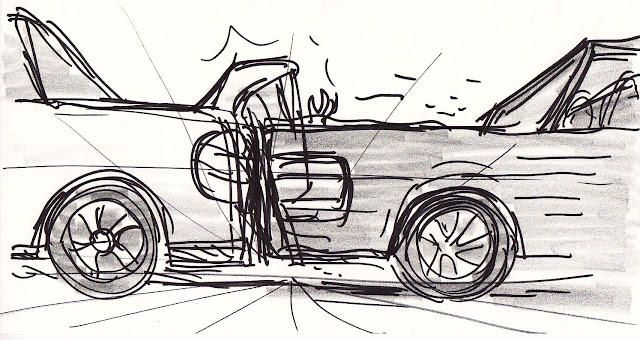 I felt a big hit!!!We realized we had not only hit the Cadillac behind us but also that there were two people inside. 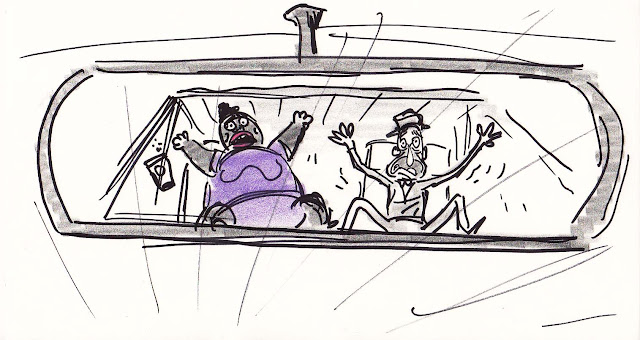 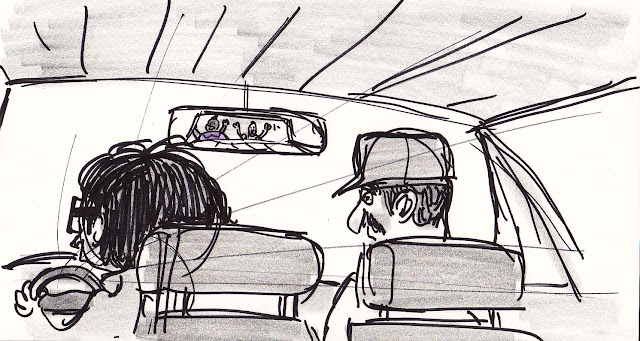 I was nervous and didn't know what to do so I was getting ready to drive far far away. Regis told me to calm down and stop the car right away. If we left the place without stopping we would be charged with "hit and run." 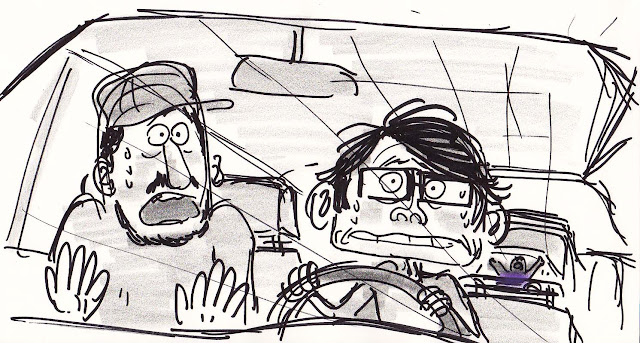 The best thing to do in these situations, Regis said, was to go talk to the lady and to exchange information so I wouldn't get in trouble with the DMV. I was feeling scared and nervous since the lady was screaming her lungs out of her Cadillac. 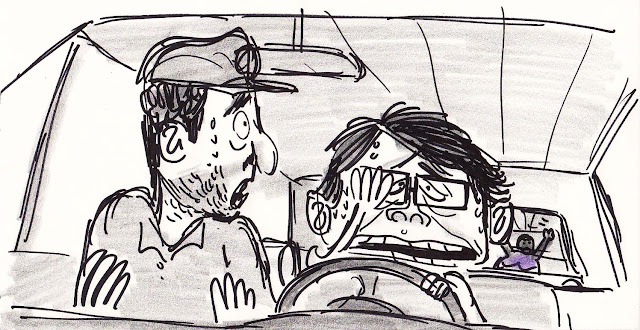 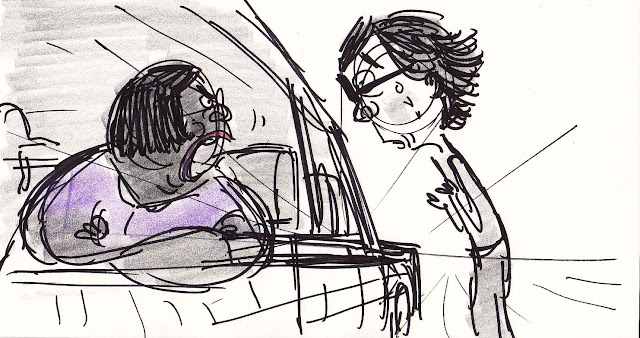 And then, for more than 30 minutes we had to hear her sermon in how a bad driver I was. My friend Regis tried explain to the lady that I was just heading to the DMV to take my test and I was just a little nervous. The lady said - " Oh Boy, that is not a good sign. This boy's gonna  fail. 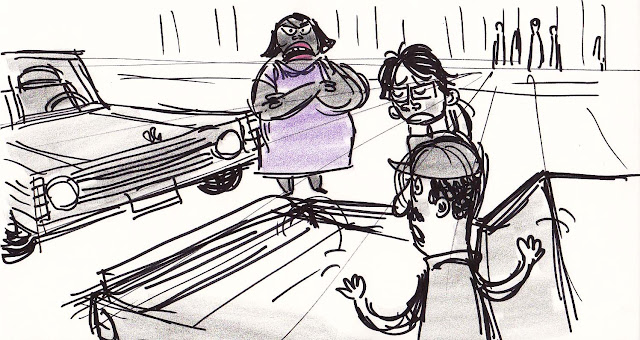 The Cadillac lady asked me to lift my permit and to smile.  I did so. 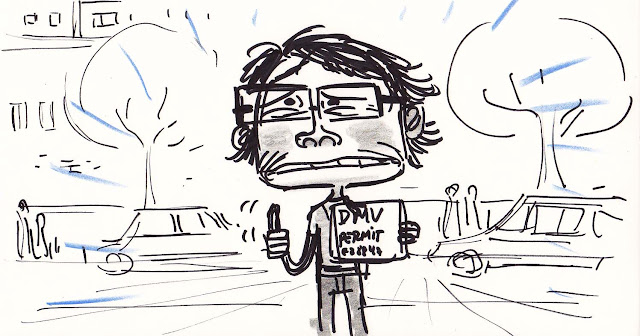 ...and then she pulled her camera and took a nice picture of me. On that moment,  I felt as if I was a wanted criminal or someone really dangerous. 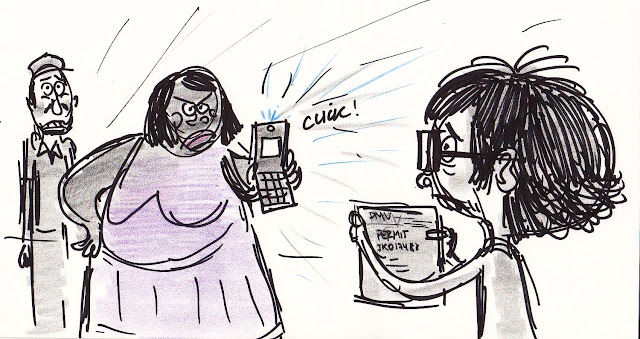 And then, with a scowl in her face the Cadillac lady stared at me and said -
"Thats why I looove my smart phone!!!" 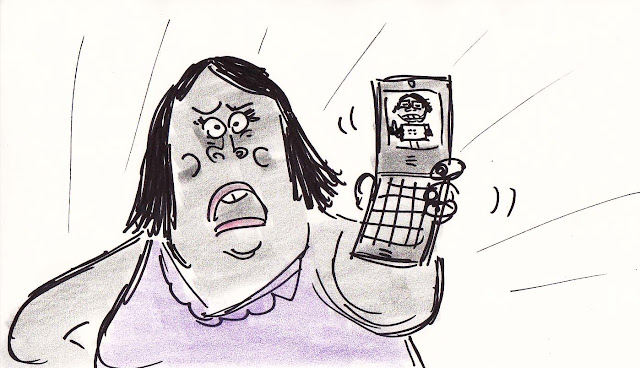 After all this mess I was feeling extremely nervous and discouraged. As a kind soul, Regis kept pumping me up and said that the incident was actually a sign of "good luck". All my bad luck had already happened so from that point on I would have a flawless behind-the-wheel test. 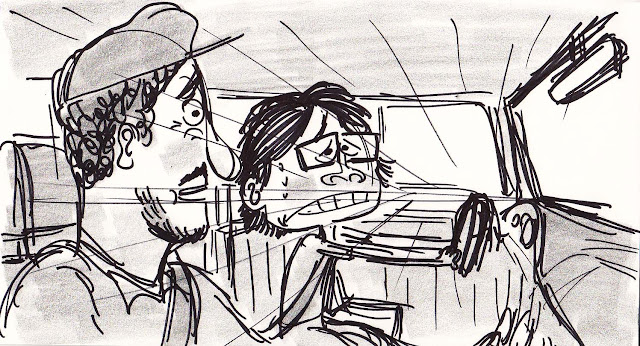 Finally we arrived at the DMV.   It was hot like hell and the place was crawling with  loud people. 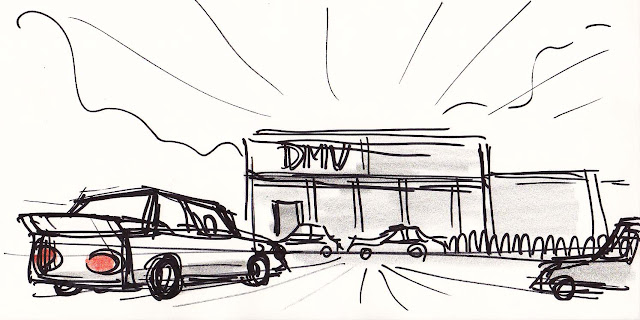 Our turn in line was very close.  My confidence really low from all that previous disaster with the horrible "Cadillac" Lady. 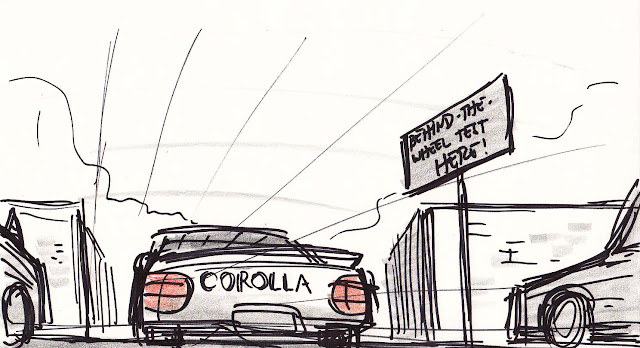 I was sweating like a pig and feeling nauseous. Regis noticed how miserable I looked. 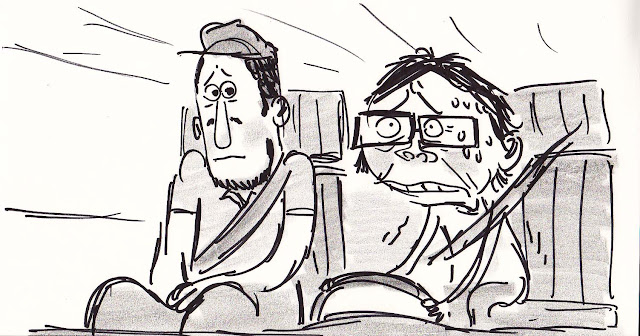 As a kind soul he couldn't help but seeing my struggle. Again he decided to pump me up. 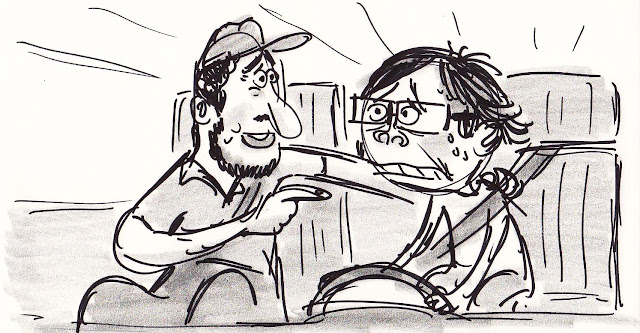 Regis started telling me funny stories that happened with him on Twitter so I would loosen up a bit. 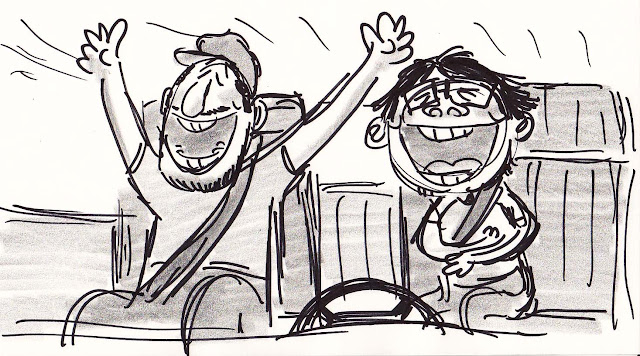 Minutes later we were all cracking up from those really funny Twitter stories until the DMV instructor  showed up at the window. 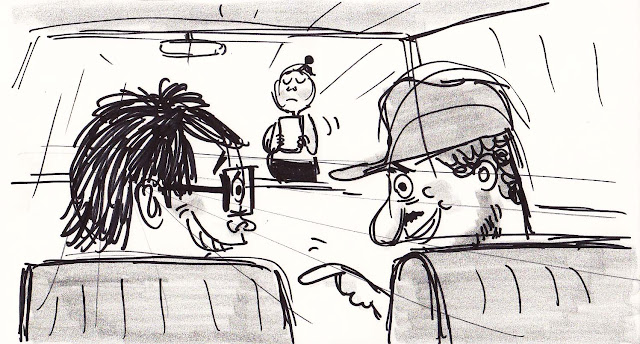 It seemed as she had heard our jokes and thought we were laughing at her because she looked kinda pissed off. 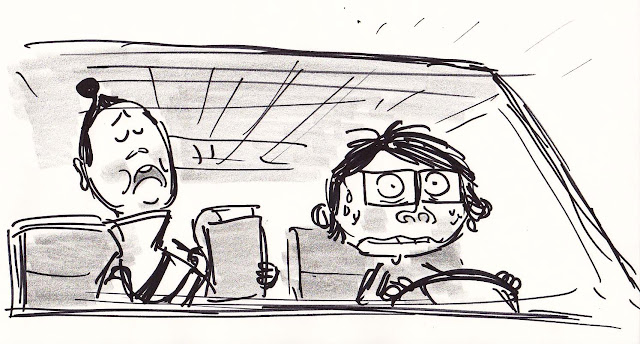 With a terribly angry voice she yelled - " GOOO!!!"  At that moment I felt really nervous and insecure and all my learning skills went down the window. The only think I could remember was stepping on the gas. 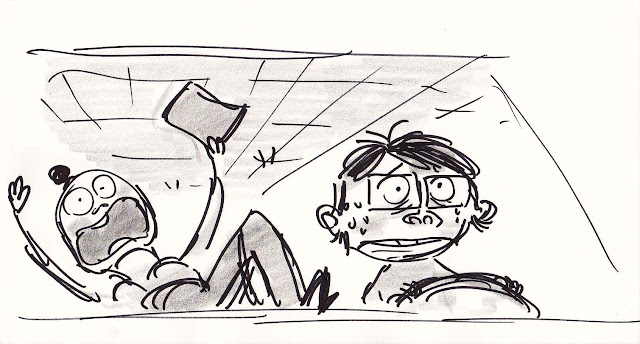 and I really stepped on it.....a bit too much I guess. 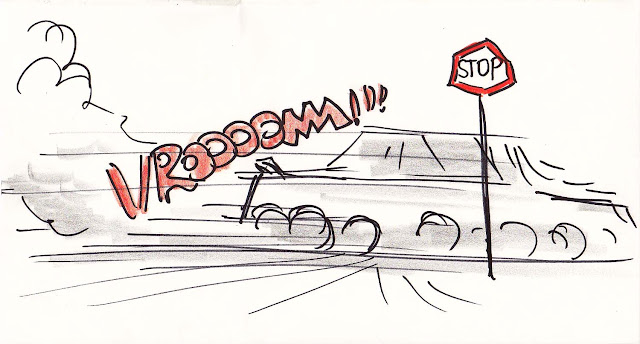 And that was the end of my test. 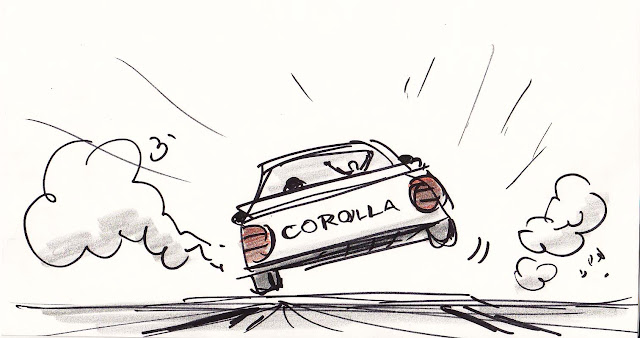 Megan Nicole Dong said…
hahaha, your stories are always so entertaining! A lot of my friends failed their driving test the first time. I failed my first time. You can do it!
5:33 PM

Régis said…
LOLS LOLS LOLS!!! I like how you made me look like a young muppet Fidel Castro. ;p Thanks for the kind words and caricatures, I loved it all. Good thing we can laugh about it now... well at least I am.

Alex K said…
My driving test is in 7 days from now, it's like you've illustrated the thoughts that have been going through my mind perfectly! Keep on trying! :)
9:26 PM

Amanda said…
I didn't get my license till about three months ago and I'm well over the 16 year old mark... it was for all these reasons and more that held me back (especially those crazy people on the road). I was beyond nervous too, but passed with only two minor errors (safety margins, what are those?!)

Big hugs and better luck next time! You can do it! Just need to have some coping skills to keep yourself under the panic line enough till you pass the relief line when you finish the test successfully!
1:24 AM

Gabby Zapata said…
Hahah, oh man. That was an awesome story. I remember my driving test.. I didn't even get my license until mid-college. But I barely drove anywhere because I was in school all day animating.

Jenny Davey said…
Oh my goodness Leo that was funny. I failed my first test for speeding as well! The lady yelled at me too and had a fit inside the DMV office, yelling, "She FAILED!" I bawled.
7:42 PM

James Baker said…
I can identify; I cannot drive either... I really enjoy the illustrated stories from your life. Please do more!
5:37 PM

Fawn said…
Haha, I mean, it was probably not so funny when this happened, but I'm glad you're alive. Biking to work isn't so bad. There are many happy squirrels in the neighborhood.
9:32 PM

Mia Patch said…
Well, everybody’s nervous on their driving test, unless you’ve had a chance to practice beforehand. Although taking your picture and all is a bit over the top, IMO. At least you have a funny story to tell and reminisce on about your driving experiences. I mean, how often do you encounter situations like that, and on your way to a driving exam, no less?
6:57 AM

Unknown said…
The way yowu have presented the blog is awesome.The blog is quit informative too.drivers ed online
4:31 AM